Aviatrix Amelia Earhart fully deserved her celebrity status, even though it initially came about fortuitously when in 1928 she was offered the opportunity to be the first woman to fly across the Atlantic after the one initially chosen pulled out fearing the flight was too perilous.

Her life up until then had been no bed of roses. She fell seriously ill during the 1918 Spanish flu pandemic, her family had financial difficulties, and she strove hard in many domains, including aviation, where, as always, she tried to further the position of women.

On what was to be her last major exploit, an equatorial round-the-world flight, in 1938, she got two-thirds of the way but then failed to reach a minuscule island in the middle of the Pacific Ocean.

The president of the United States ordered a large-scale search to no avail, and ever since people have been wondering what happened to her and her navigator.

Earhart later commented she had been little more than a sack of potatoes on that 1928 transatlantic flight. However, the sack must have had grit and courage, as just crossing the Atlantic was a difficult and extremely risky thing to do at the time. Also, the aircraft had to be flown by instruments, something for which she had not at the time been trained. Even so, on their return to Manhattan, she and the two male pilots received a ticker-tape welcome, with her seen as a plucky young woman and getting top billing.

Her fame further increased when, in 1932, she became the second person after Charles Lindberg to fly solo across the Atlantic. Though her fifteen-hour flight from Newfoundland to Ireland was much shorter than Lindberg’s historic thirty-three-hour flight in 1927 from Long Island to Paris, it proved a considerable ordeal, with icing problems and leaking fuel splashing onto her face.

With the help of her husband, publisher G. P. Putnam, she had stepped on a publicity treadmill, involving a grueling lecture schedule and a constant need to find trailblazing feats to stay in the headlines and keep the money coming in. In the summer of 1937, aged forty and probably somewhat jaded, she was going to embark on what should have been her last major flying exploit, an eastward around-the-world flight along the equator in a Lockheed Electra twin-engine airliner fitted with extra fuel tanks in place of the passenger seats.

She and Putnam were mortgaged to the hilt despite financing from Purdue University. An earlier mishap when taking off in the Electra from Honolulu on their initial attempt to make the around-the-world trip in a westerly direction had added to their costs. On their second attempt, a change in the trade winds forced them to make it in an easterly direction.

Accompanying her on the trip in the key role of navigator was ex–Pan Am navigator Fred Noonan. While reports that he was fired from the airline for a drink problem are disputed, he was an exceptionally capable navigator and an expert at celestial navigation.

Starting from Oakland, California, Earhart and Noonan flew to Miami and then on to Brazil before crossing the narrowest part of the Atlantic to Dakar. After crossing Africa, they flew on to Pakistan, Burma, Singapore, and Darwin in Northern Australia. At times Earhart was quite sick with dysentery, and she must have been exhausted when she arrived at Lae, Papua New Guinea, after the short hop from Darwin. Lae was the departure point for the long transpacific legs, first to tiny Howland Island, and from there on to Hawaii.

Noonan was none too happy, and after an argument with Amelia at Lae apparently went on a drinking spree. When her husband, back in the States, heard about it, he reportedly urged her to call off the venture. She was reluctant to do so, as they had successfully flown twenty-two thousand miles and only had seven thousand to go, and she thought the hardest part had been accomplished.

Whatever his condition, Noonan must have been quite daunted by the prospect of navigating over water with no landmarks to an island only 1.6 square kilometers in area, rising only a foot or two above the sea.

Interestingly, it was the introduction of flying boats in the early thirties that enabled the United States to take over a number of essentially uninhabited islands from the British, which, in the case of Howland, it did only in 1935.

Having jurisdiction at this convenient midway point between Lae and Hawaii in 1937, the US government had prepared a landing strip on the island especially for Amelia’s benefit. A US coast guard cutter was also ordered to stand by nearby to render assistance.

Unfortunately, the published coordinates for Howland were out by some five or six miles. 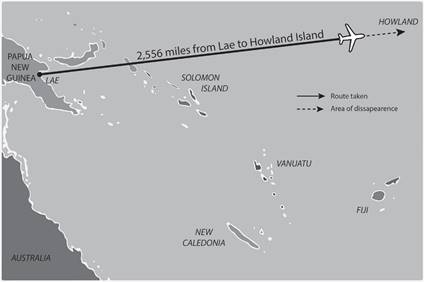 For navigational reasons, Amelia and Noonan timed their departure from Lae so they would fly over land and various identifiable islands in daylight, and then fly overnight over the ocean to Howland, arriving there just after dawn. This meant that while over the ocean and far from land, Noonan would be able to check their position from the stars, provided the weather was not too cloudy. Even after dawn, with no stars to get a fix, Noonan would be able to determine longitude but not latitude by how far the sun was above the horizon for the time of day.

He would also be using dead reckoning, whereby one’s position is calculated according to one’s speed, direction of travel, and elapsed time. As one’s actual speed and direction over the ground, as opposed to through the air, depend on the direction and speed of the wind, the method can introduce considerable errors over long distances. Of course, for dead reckoning, correct identification of the waypoints is essential, and as mentioned below it seems Amelia and Noonan misidentified a ship as one that was meant to serve as a waypoint, partly due to their inability to communicate by radio.

As the Electra got farther from Lae and nearer Howland, the coast guard cutter Itasca, waiting just off the island, began to receive some messages but could not seem to contact them. Finally, at 7:42 a.m., nineteen and a half hours after their departure from Lae, the Itasca received the following message from the Electra:

We must be on you but cannot see you . . . Gas is running low . . . Been unable to reach you by radio. We are flying at one thousand feet.

Indeed, the signal was so loud the radio operator expected to see them overhead. However, there was no sign of them. The transmission had not lasted long, and the Itasca could not get a fix—some say because its direction finder was not working. The Itasca emitted smoke, and had there been no cloud, the Electra could have flown higher and seen them from fifty miles.

An hour later, at 8:44 a.m., there was a message in which, according to Doris L. Rich’s biography[v], “Amelia’s voice—shrill and breathless, her words tumbling over one another—came in.”

Clickable LINKS to
the AMAZON page
for YOUR country

Both Print and Kindle