The More4 TV documentary was good as far as it went but did not include contributory factors such as the captain only having had an hour’s sleep the night before, the poor relationship between the two copilots, and the fact that the captain was probably not in his bunk.

A ban would reduce the UK water companies income. They seem to prefer to hold off imposing a ban at the risk of having to impose a much stricter one later, or even having to ration supplies.

It was a good call in 2018 for just when an increasing number looked inevitable, the rain came.

Apart from the risk of having impose stricter bans, or even ration supplies, later, this seems fair in that really poor people would not use much more water while the very rich with big gardens and lawns (and water meters?) would pay more, and be able to do so.

Of course this depends on people having meters.

In updating Air Crashes and Miracle Landings we added this disastrous test flight because it had so many lessons for pilots and programmers of fly-by-wire systems. The lessons learned most likely saved lives on revenue flights. Extract:

Not All Pilots Can Conduct Air Tests (Off French Med. Coast, 2008)

What was expected to be a mere formality turned to disaster

This highlights the danger of pilots who are not test pilots carrying out tests without defining what constitutes a pass or fail, and the problems a pilot can face on taking over manual control from the computer. 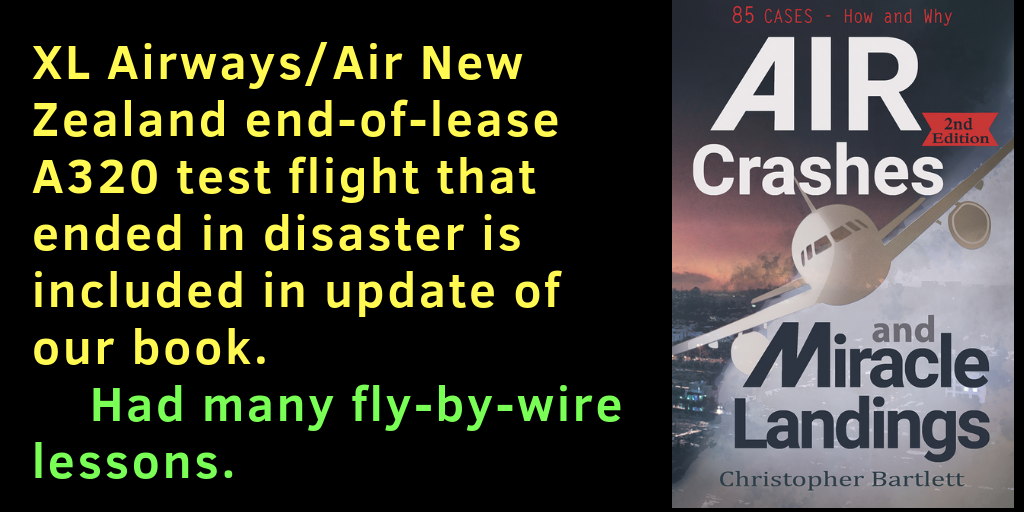 ….
The elevators (operated via the sidestick) could not overcome the combined effect of the pitch trim set at its maximum nose-up and the go‑around thrust of engines set low down under the wings also levering the nose up.

At 15:45:42, after rising enough for the stall warning to stop momentarily, the airspeed had fallen to 40 knots. Two seconds later the maximum values recorded were a pitch of +57 degrees (i.e. exceedingly nose up), and an altitude of 3,788 feet, at which point the aircraft lurched over and careered down into the sea. All on board, including three Air New Zealand engineers and a New Zealand Civil Aviation Authority official in the passenger cabin, were killed.

Only sixty-two seconds had elapsed between the time the stall warning first triggered and the moment the recordings stopped!

This crash was very troubling because a month earlier another Airbus, a Qantas A330, had behaved very bizarrely (see Chapter 17) off the coast of Australia, albeit with the pilot managing to recover. After first suspecting the Air Data Inertial Reference Units as the Qantas A330 investigators had done, the French investigators were able to show the cause was the freezing of the water in the mechanisms of the two angle of attack sensors on the left of the fuselage. A third sensor still working was ignored by the system on the “odd man out” principle.